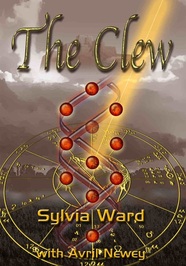 The Clew was written by Sylvia Ward with Avril Newey and is a full and true account of the extraordinary journey made by Avril and the soul-friends she was led to meet in order that, together, they could re-member their shared past lives, heal their common karmic wounds and fulfill the task that they had contracted to undertake four thousand years earlier.

What kind of a book is it?

At its heart, it is a magical adventure story for adults - an adventure of the mind, the heart and the soul. It begins with an earthquake and ends with the symbolic re-enactment of a sacred marriage. It describes and confirms the power of past-life memory. It also confirms how the emotions of love, hate, anger, grief and bitterness are carried and fed for lifetimes, and re-ignited whenever past-life reunions occur.

It illuminates the soul’s journey to heal its old, and deep, wounds and to transform such negative emotions into positive life-affirming actions.

It tells of a particular group of individuals to whom such memories were returned in this lifetime in order that they could heal themselves sufficiently to be able to stand, at a particular moment and in a particular place, ‘without grudge or grievance, for one second’. The ancient world proscribed and honoured such ceremonies at particular times and in particular places - apparently understanding something essential that our world has forgotten.

Interspersed between Sylvia Ward’s narrative sections are extracts from these intuitive directions that Avril Newey first received one Spring afternoon in the centre of England, and continued to record throughout the following eight years.

‘There are so few left and the work must be done or there will be a rent in the Universe and the light will go out’.
said one of Avril’s channelled voices.

These ‘Teachings’ as the group came to call them, not only offered specific and practical directions but also spoke of the active energetic relationship between humans and the Earth. They revealed long forgotten ancient wisdom about the nature of life and our universe. They suggested specific remedies for illness – which worked! Above all else they spoke of the power of mankind’s individual creativity to change everything that exists both energetically and in form. They confirmed that our forgetfulness of this power had brought the Earth and humanity to the very edge of destruction and appealed for our help in order that Nature could be returned to balance. One knowledgeable and erudite friend has referred to these ‘Teachings’ as ‘Amongst the finest channellings I have ever read’.

Why should you read The Clew ? Perhaps, because, in the end, this is a real story about real people, just like you, whose lives were transformed by their experience and, through reading their story, you may also, like them, discover how to re-affirm your own life and touch your own soul.